Also referred to as: Volvo V60 Cross Country 2021 and Volvo V60 Cross Country 2023.
No reviews yet. Be the first to review it!
Write a reviewAsk a question
‹ See all Wagons
Write a reviewAsk a question
See the Best Wagons in 2022 as rated by Australians on ProductReview.com.au.
Brand Manager for Volvo? Register now and take advantage of ProductReview's Brand Management Platform! 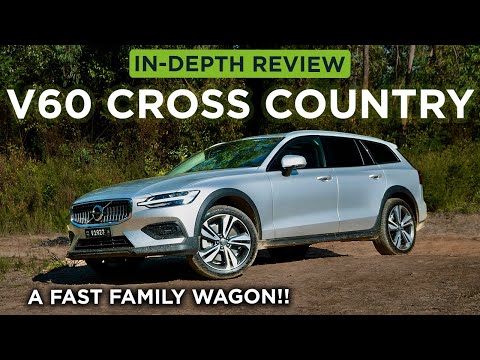 SUVs are everywhere. They’re the default choice for families looking for more space for people and cargo.

This means the humble station wagon has been cast aside as the appetite for a raised seating position has taken precedence.

However, there’s been a wagon renaissance in the form of lifted wagons. It takes the best parts of a station wagon (space, styling and a lower centre of gravity) and provides the lifted driving experience most family car buyers crave.

This is Volvo’s take on that trend. It’s the V60 Cross Country, and it’s the modern rendition of the family station wagon. It has more ground clearance, more durable exterior trim pieces and most importantly, it’s cooler than your average SUV.

Here’s why Volvo’s wagon makes for one of the best ways to transport a family in comfort and luxury. Volvo’s build quality has been progressing in the right direction over the past few years so much that now we are met with a product that surpasses the likes of Mercedes Benz.

I’m a stickler for attention to detail in products that demand a more upmarket price. The V60 tickles all the right spots in my brain in demonstrating that every inch of this car was carefully considered.

This is apparent in the weighted doors, miniscule badging inside the exterior lights, the small Swedish flag attached to the front seats, or felt lining inside the front door bins. It feels as if this car was assessed by somebody with my level of scrutiny and added these small features that really go a long way, even if you don’t notice it at first. I’d certainly recommend that Lifestyle Pack for the sunroof, tinted rear windows and upgraded sound system. However, the other two options don’t feel as necessary.

Compared to the Audi A4 Allroad and the Mercedes E Class All-Terrain, the Volvo stands out with a sharper price for its level of performance from its 2.0L MHEV engine, space, luxury amenities and safety features.

We are missing air suspension here, so if that’s a must, you’ll need to spend a bit more with the likes of Audi and Mercedes. Volvo as a company has taken the Swedish route of customer service. Whether it’s using the car itself or accessing information about their services, Volvo is transparent and seemingly above the competition.

Warranty is 5 years/unlimited kilometres which includes the option to purchase a service plan for either 3 years/45,000km or 5 years/75,000km (whichever comes first). This costs either $1,750 or $3,000 respectively.

In addition, you have over-the-air updates to your car, alternative transport, car wash and 8 years of 24 hour roadside assistance.

These small final touches certainly show that Volvo is working to create an after-sales service that matches the quality of the cars they produce. Thanks to a mild-hybrid system, this petrol four-cylinder is a smooth and quiet operator.

The in-cabin experience is serene and allows you to focus on the comfort this car provides. Although, if you want to switch into Sport, you can get an intoxicating exhaust sound that burbles between shifts, just like a far sportier VW Golf R - an unexpected but welcome surprise during my test.

The upgraded Bowers and Wilkins speaker system is honestly a next-level upgrade. I thoroughly enjoyed hearing more detail in my music and podcasts than I could with my $400 set of earbuds. There’s no unpleasant distortion to experience; instead, you have an audiophile's dream speaker set-up.

I'd been looking to upgrade to the Lifestyle Pack purely for the inclusion of this speaker system, as it sounded like one of the best systems I’ve tested, alongside the $15,000 system in a Range Rover we briefly rode in.

Braking is buttery smooth to complement the primary purpose of this car, which is comfort.

A range of drivers can enjoy just how capable this larger station wagon can pull up, without having to worry about any awkward bites or jerks from these brakes.

In addition, there is autonomous emergency braking and a radar cruise control system called ‘Volvo Pilot’. These enhanced the drive of this car without feeling too intrusive when a potential obstacle came into the path of the V60. You wouldn’t pick it, but the V60 Cross Country isn’t slow. If you have an appetite for fast estates but need the extra ground clearance, the V60 goes some way to satiate that.

Setting up for a launch is easy: simply stomp on the brake and accelerator and lift off the brake for a brisk run to 100km/h. Accompanying this rapid acceleration is a raspy exhaust note which ‘farts’ between shifts. I really loved the way this Volvo was able to match its streamlined and muscular looks with performance like this. This automatic 8-speed transmission doesn’t strain or hold gears like a wet towel hanging over this car’s performance. Instead, snappy and rapid gear changes are had when deep in the accelerator pedal.

When cruising, there’s a seamless transition between gears, which allows for a comfortable ride at speeds suitable for school zones.

Although you can change gears manually, you’ll need to do that by wiggling the gear selector from left to right, rather than shifting up and down or via a set of paddle shifters. It’s an all too Swedish solution to changing your own gears. Despite being lifted to have 210mm of ground clearance, the way this Volvo can tear up corners is as fun as it would seem.

On tarmac, the V60 is as composed and raised over the ground as a medium-sized SUV. Even though we have larger alloy wheels equipped, the V60 was never phased by potholes or other hurdles Australian roads could throw at it.

Cornering was a lot of fun, thanks to being able to put power through all four wheels via the AWD system. There was plenty of grip, with a hint of understeer at the limit.

When overlanding, the V60 was surprisingly able to replicate its cloud-like ride, even though it lacked air suspension. The larger alloy wheels did mean though that I needed to slow down for deeper ruts and large rocks.

However, it was the long wheelbase with relatively long overhangs both front and rear that limited the V60, preventing it from matching the ease of use that the likes of the Subaru Outback enjoy on tougher off-road sections. Mild hybrid systems don’t seem to save a whole lot of fuel. The range of vehicles I’ve driven that use this technology only benefit in straight line performance, highway cruising and seamless gear changes.

The same is said for the V60, which claims 7.4L per 100km as its combined consumption figure. I saw figures as high as 10L per 100km, yet this is what I’d expect for a car like this. It’s a petrol-powered family wagon; it’s not going to be the most economical choice compared to a less powerful but more efficient turbo-diesel power plant.

That being said, it’s worth mentioning that this is the only engine option for the V60 Cross Country here in Australia. Two screens adorn the interior of the V60, consisting of a large vertical centre screen and a well-contrasted instrument display.

A heads up display joins the tech in this cabin, which is an exercise in minimalist design. The centre display hides most of your controls, aside from the very basic media and climate controls which are found as buttons below this screen.

This system is slightly older than the one we reviewed in the XC40 Recharge, so it misses out on integrated Google Maps. Once you’re familiar with the sub menus and user interface, the V60 is extremely easy to operate and find its controls. I did find my initial contact a little confusing, however it only took me around 10 minutes to fully understand where all of my basic controls were.

Key points of interest included the amount of light that entered the cabin via these very square rectangular windows and the almost jewelry-like shifter knob and volume dial. Every touch point felt as if it was meant to be engaged with by a human, as there was always a sense of deep satisfaction when interacting with this car. The size of the boot is 519L with seats folded up and 1431L with all of the second row seats folded flat. The V60 is a true station wagon in its practicality.

It’s a large, flat boot, with an equally-sized hatch opening that makes fitting multiple bags and other luggage along with it a breeze, especially when utilising the inbuilt cargo divider and cargo nets to secure smaller items from rolling around in the back.

The automatic tailgate is also more accessible for smaller humans to close, thanks to an inbuilt sensor for your foot found under the rear bumper that’s used to open and close the hatch. Folding the seats is easily done from the boot. Despite this being a 60:40 split seat, you can use a ski pass-through in the middle seat for longer items if you need to carry four people in comfort.

Rear seat room is plenty for adults, even those taller than 6 feet. That long roof doesn’t need to taper down like many SUVs require, allowing for a uniform shape for more head room. A long wheelbase for passengers creates more leg and foot room, although the middle seat suffers from a lack of foot room from a large transmission and exhaust tunnel. Even with a few options added, the V60 is a well-equipped car. It’s a complete package, with heated/cooled front seats, a suite of safety features and thoughtful touches like dedicated shopping bag hooks in the boot.

Here’s a full list of features that come with the V60 Cross Country, making it close to being the complete family car package: This was a difficult decision to come to. There’s stiff competition from the Germans, leaving the Swedes to fight a hard fight in a niche market.

Where the Volvo shines is its quality in its ride, materials and performance. I found the V60 to tick most requirements for families who might not want an SUV and prefer something with a little more space and a lot more style. The V60 turns heads unlike its competitors; it’s engaging to drive but also can relax over long distances.

If I had to pick a modern wagon for family duties, the V60 Cross Country would be one of my top picks to consider alongside rivals like the Audi A4 Allroad. Concessions come in the form of the one engine option and lack of air suspension that would make the most of this lifted chassis setup.

However, if you ask me, it’s one of the best luxury wagons for less than $100,000. It makes you feel like you made the most of the money you spent on it, rather than lusting for another model above it, or wishing you had one less human to cart around. It makes having a family car look cool, and at the end of the day, that’s a hard thing to beat.